As one of Gibson’s most celebrated artists, Slash is as legendary is his back catalogue of riffs. Famous for his work with Guns n' Roses, Slash quickly was accelerated to rock stardom, effortlessly cool slung with his Gibson Les Paul Standard. To commemorate, Gibson have released these new amazing Slash Edition Les Paul Standard range, all finished in various iconic Slash styling. The Slash “Victoria” satin Gold Top model features a Vintage 50's profile, maple top, solid mahogany body with dark back finish and completed with some of Slash's very own personal touches, such as the C-shaped neck profile, unique uncovered Gibson Custom BurstBucker Alnico 2 pickups, hand wired Orange Drop capacitor electronics and comes with a Vintage Brown hard case. Finally complimented with Slash's 'Skully' signature drawing precisely placed on the back of the headstock, Slash's new Ernie Ball strings, signature truss rod and four Jim Dunlop Slash picks. Typical of Gibson Slash models, this guitar screams at you when plugged into a wound up tube amp, with massive sustain, warmth and a rare vocal like quality that will take your epic solos to the next level. This is a must have for any Slash or Guns n’ Roses fan but will be equally at home in any guitar collection. Includes hardcase, accessory kit, a set of slash picks and a blank truss rod cover. Oxygen Music stocks a great range of Gibson Guitars, including the Slash 'Victoria' Gold Top Les Paul Standard. 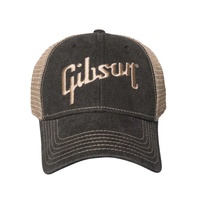