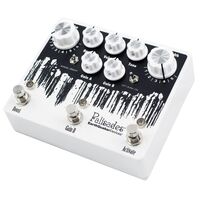 The Earthquaker Devices Palisades is one of the most feature-rich mid-boosting overdrives they have ever made. Based on the TS808 the Palisades has six difference voicings which alter the character of the distortion by changing the clipping diodes, as well as a bandwidth control which changes the tone and gain structure of the pedal. Both of those controls combined with the seven other knobs and switches on the Palisades ensure that you are able to dial in any number of crunchy, gainy tones. Oxygen Music is proud to stock a wide range of Earthquaker Devices effects pedals including the Palisades.