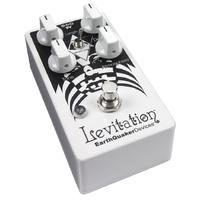 EarthQuaker Devices' Levitation is a full on reverb machine with plenty of voicings hidden behind the four knobs. This Levitation device is a vintage-voiced reverb that aims to fit somewhere between dirty sixties chambers, classic spring and the big, ringing plate reverbs of days gone by. Four knobs and one switch control quite a bit more than you’d expect. Want a slap back small room sound? Set all of your controls to the minimum and use the mix to dial in the sound of room devoid of any thing but a guitar and amp. Want to revel in infinite spatial oscillations? Flip the toggle to Long, turn up the Atmosphere and Decay. Oxygen Music is excited to stock a wide range of EarthQuaker Devices, including the Levitation, a mystical reverb pedal full of suprises.