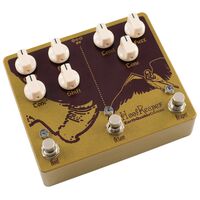 Double Fuzz with Octave Up

The Earthquaker Devices Hoof Reaper gives you two of Earthquaker’s highly popular fuzz pedals, the Hoof and the Tone Reaper, and adds an octave up circuit, all inside the same housing. The Hoof is a Muff-style fuzz that’s tighter and cleaner than the classic Russian muff, capable of going from a warm driven sound to a massive fuzz with an amp-like sustain. The Tone Reaper is vintage-style fuzz capable of producing a wide range of vintage sounding fuzzes. The octave just adds a swelling octave up into the mix to add a little extra zing. Oxygen Music proudly stocks a large range of Earthquaker Devices effects pedals, including the Hoof Reaper Double Fuzz with Octave Up. 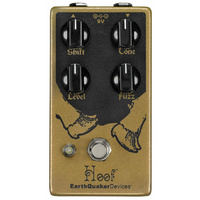