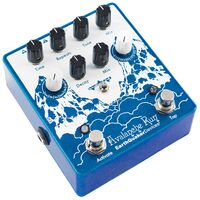 The Earthquaker Devices Avalanche Run is a reverb and delay pedal capable of outputting the most cavernous stereo soundscapes your brain can conjure up. The Avalanche Run has two seconds of delay and the ability to reverse it, or separate it into subdivisions that can be controlled with the tap tempo footswitch. It also has a lush, plate-style reverb which features a decay control and a mode which adds a volume swell. Every control can even be controlled by an external expression pedal making it a very dynamic pedal even in a live situation. Oxygen Music are proud to stock a wide range of Earthquaker Devices effects pedals including the Avalanche Run V2.