Johann Sebastian Bach is more or less the alpha and omega of piano playing: there is hardly a piano pupil who did not start off with his little preludes or his inventions. And almost all pianists regard his Well-tempered Clavier as an unsurpassed highpoint in the history of piano music. Our volume follows these well-trodden paths, but not without the occasional sideways glance at some less prominent pieces by the Master, such as his picturesque Capriccio on the departure of a beloved brother. 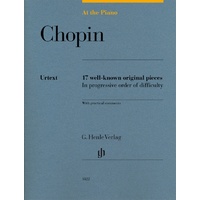 Journey Through the Classics - Romantic Collection