1880 Ukulele Co's 300 Series Tenor Ukulele features Koa back and sides and a solid Koa top in a natural high gloss finish. This allows the full tone of the Ukulele to shine through, and the Koa wood used will provide a smooth warm tone, while also remaining rich and bright. With a bone Nut and NuBone saddle paired with Aquila strings, tuning stability is guarenteed on the 1880 300 Series.

The ukulele was introduced to the Hawaiian Islands by Portuguese immigrants in the late 19th century. One immigrant in particular, cabinet maker Manuel Nunes, is generally credited as one of the pioneers of the ukulele. Manuel began building ukuleles commercially in Honolulu in 1880 and it was soon embraced as the national instrument of Hawaii. In paying homage to the legacy of Manuel Nunes and his role in establishing the ukulele and its music, The 1880 Ukulele Company logo incorporates the numerals 1880 flanked by the outline of antique wood carving tools over a stylised royal crown.

Oxygen Music is proud to stock a wide range of 1880 Ukulele's, including the 300 Series Soprano, Concert and Tenor Ukulele. 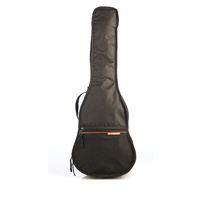