Designed to be used for both video and audio recordings, it features a patent-pending rotatable enclosure that you can easily position for the best stereo image in both landscape and portrait orientations. Now you can capture pristine sound no matter whether you’re recording a rehearsal or a concert, capturing audio for videography, acquiring audio for a music project, recording instruments while on the move, saving a lecture or speech or creating your next viral video hit. iRig Mic Field lets you create accurate and faithful field recordings in any imaginable context.

OXYGEN MUSIC is proud to stock a wide range of IK Multimedia products, including the iRig Mic Field. 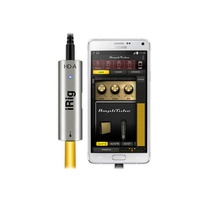