Based on EarthQuaker’s Palisades, their ultimate dig on the “808” style tube screamer, the Dunes is a condensed version with every key ingredient crammed in. The Dunes is a Tube Screamer variant, and as such, gives you that real mid-boost that you’d expect. However it goes a step further, adding a few extra features; The Voice, The Normal/Bright, and the Bandwidth. Voice: Gives you three tonal choices; MOSFET, Silicon and None. These give you different compression when you add gain, really affecting the way your amp is caused to break up, adding just a pinch of extra character.

Normal/Bright: This switch works as you’d expect it to; you have your Normal overdrive, and your Bright overdrive. This is incredibly helpful when you’re running with darker pickups; you can flick to Bright and hear your guitars voicing glisten with more life. If you’re running single coils, keep it on Normal, and you’ll be sweet.
Bandwidth: Something that a traditional Tube Screamer lacks – here, the Dunes gives you the option of adding a lot of low end – great for pulling more energy from those single coils, or you can switch it back for the more traditional midrange boost, without the low end bump. 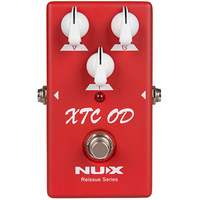